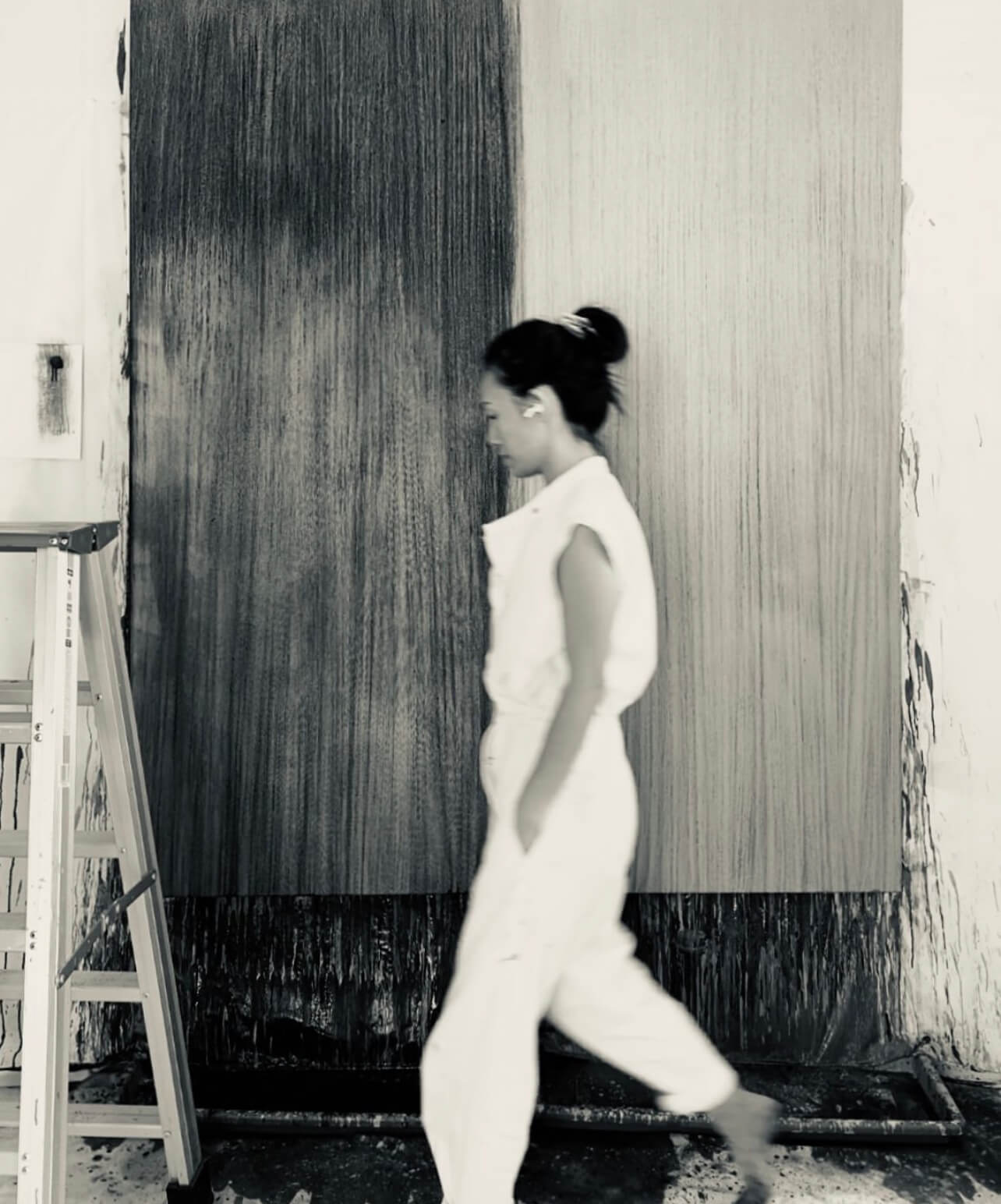 Born in Kuala Lumpur (1980), Sylvia Ong is a contemporary artist currently living and working in Dubai, UAE. As a performing arts graduate with a major in cinematography, she has directed TV programs and corporate videos, and produced a host of TV and radio commercials, as well as still photography and fashion shoots for numerous high profile clients and brands.

She has also made several short films; some of which were nominated at the 16th Malaysia Film Festival, and even picked up a Best Jury Awards at the Freedom Film Festival. Her work has been selected for the longest running piece at the American Asian Film Festival, with screenings at the Bangkok, Rotterdam, Indonesia, Taiwan and Singapore Film Festivals, in addition to a feature at International Screening, Golden Screen Cinemas, Malaysia.

Film is only one of Sylvia’s passions. In the theatre industry, she won Best Female Actress with Theatre Selangor, Malaysia, and her monologue helped her pick up the Best Supporting Actress award at Festival Theatre Malaysia for her performance in Nur.

But her inspirations go far beyond film and theatre. To her, every place she has called home has been a source of deep inspiration, and this is evident in her latest pursuits as an artist. Painting quickly became her new form of expression and communication, with her past experiences combined with travelling and living away from home fuelling her ideas on canvas.

“Moving to Singapore, Bangkok and Dubai allowed me to explore tropical countries, modern cities, mountains, islands, and even the desert. It’s about the feeling, the general atmosphere, and sometimes the memories associated with a place. Meeting a diverse group of people everywhere has also changed me as a person, which has also impacted my identity as an artist.”

Over the past couple of years, Sylvia went from layered strokes in her first exhibition, La Fete (the French word for the gathering of family and friends to celebrate an important life event) to energetic interpretations of emotions in her second exhibition, La Maison, meaning ‘Home’. Both solo exhibitions have seen her personal experiences and stories make their way onto the canvas, always left to the viewer’s interpretation.

At first, How Happy are the Flowers, her latest series, might not seem like the most natural follow-up to Sylvia’s past two exhibitions as it incorporates such new ideas, but for Sylvia, it is another step in her journey as storyteller. With this series, she aims to spark a connection between viewers and their natural surroundings. Through research and experimentation around sounds and colour frequencies, Sylvia has managed to transpose the rich diversity of shades, tones and textures from plants and nature onto her canvas, through a bold technique combining drips and spills, with hints of subtlety.

“When I listen to music, I feel the colours, the mood – just like with film. I wanted to create work that gives one the sense that life is a journey. The space we pass through, the time we experience; it is like how we travel along a piece of music, following its every nuance. The art brings the emotions that fill the space, and it brings a new perspective to the world.”

As with much of her work, Sylvia still believes in producing meaningful conversations between viewer and canvas without creating too much structure, preferring instead a more fluid storytelling form. This is evident in her latest collection, and is truly becoming part of Sylvia’s identity as an artist. Over time, she has continuously invited us to clear our minds and allow her pieces to take us on a journey, not so much to arrive at a destination, but simply to just let ourselves take off.

“Art is my way of communication and I see it as a fluid process, where everything on earth and in the universe has a rhythm.”

How Happy Are The Flowers

If your plant could speak, what would it say to you?

Would it speak to you with kind words?

Or would it give colour to an otherwise plain day?

How Happy are the Flowers hopes to explore with its largely formless and shapeless textures and patterns. To view this collection is an exercise in emptying your mind, of temporarily putting aside the chaotic sounds of the world, and simply listening – not just with your ears, but with your whole being. It invites you to release all forms of control, and let yourself engage in a moving conversation with Nature.
This latest collection from artist Sylvia Ong uses sound waves and frequencies transmitted from plants to inspire the colours and patterns that ultimately make it onto her canvas. Each piece might contain subtle markings that hark back to the original subject, either a bonsai on the balcony or a garden in full bloom. There are even contrasting colours that often produce a jarring emotional effect that might leave one pondering a moment or two longer than they normally would.
How Happy are the Flowers is a quiet study on our individual connection with our natural surroundings. While there is no outward call-to-action to take a stand for the environment, it does draw our attention to certain environmental themes, in the hopes that one might spare a thought for Mother Nature and all her musings. 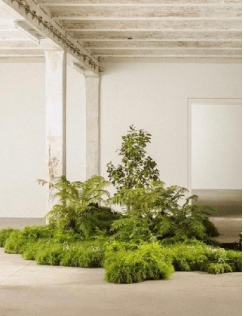 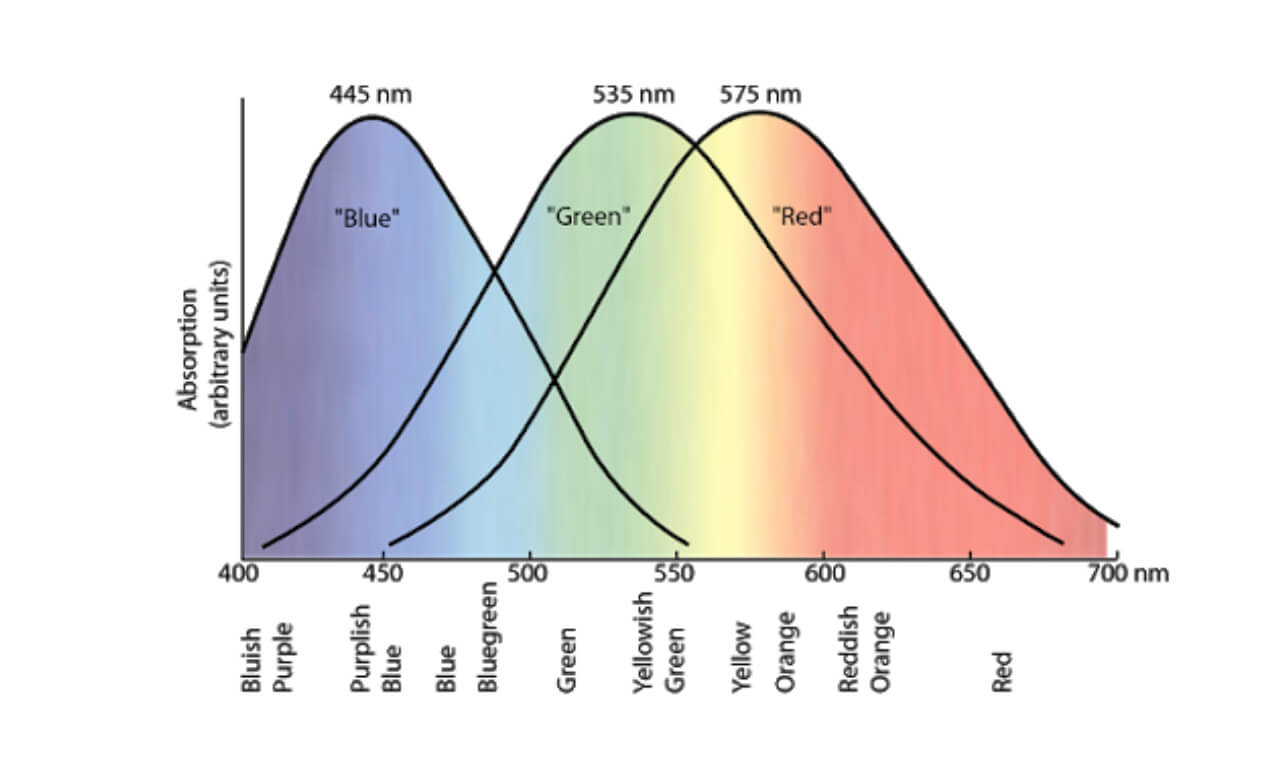 Colour is fundamental to our experience of the world around us. I love looking for rainbows after storm. Each color travels along different wavelengths of light, creating a whole spectrum, and the portion of this spectrum that we can see with our eyes, and register with our brains, is visible light.

Each of these colors, or wavelengths, operates at different frequencies.

About two-thirds of these cells are sensitive to longer wavelengths, which means we see more of the warm colours ( yellows, oranges and reds) than the cooler colours in the spectrum. This helps explain that colours aren’t static or fixed. They change depending on the light ( which is affected by time of day and the seasons) and what other colors surrounding.

Here for the color now let’s move on to the sound.

The forest really does hum with life. Trees and plants perceive and respond to touch such like wind and water, or animal passing on a trail.
Sound is a wave frequencies that travels through air. In fact, a tree needs wind to grow. The sound of frequencies is around us and everything is interconnected.
Wavelength = Speed of Light / Frequency

Sylvia uses sound waves and frequencies transmitted from nature and plants to inspire the colors. The audio interface detects a slight electrical variations in a plant via two electrodes placed on the leaves. These variation of activities from plant creates an interesting biorhythm of sound.
She then translates the sound into colors using the technology created by Benjamin Outram – “The Crystals Vibes Theory of Synesthesia”.
She is using the idea of how the water flowing in the river is yin but when it goes over the waterfall is very yang. Therefore, she choose pouring and dripping technique and also there are contrasting color in each pieces to show the balance warm and cold, bright and dark or soft and strong. Each piece of the layers has it’s balance like in the Dao. Yin is dark and Yang is brighter and stronger. The sunbeams are yang when compare with the shadows. The yang starts an action and Yin receives and complete it.
Each layer of oil paints takes a minimum 24 – 48 hours to dry before the next application of color can happen. The final works are raw and the simplicity does give you a sense of calmness.
One can see the colors but can one feel it? 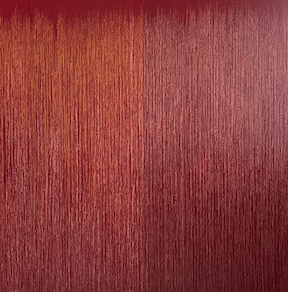 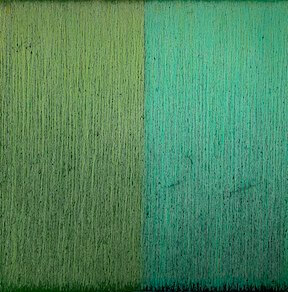 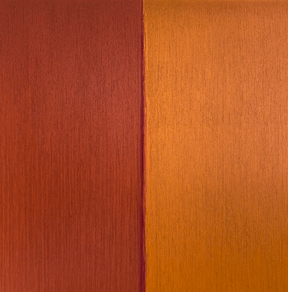 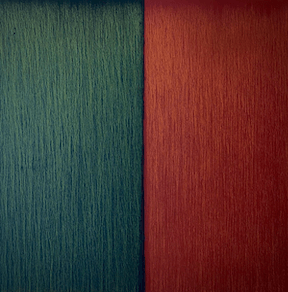 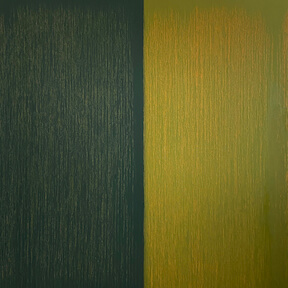 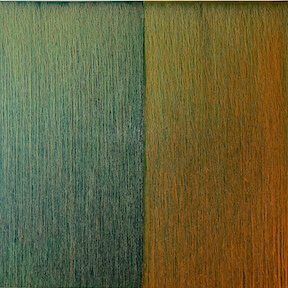 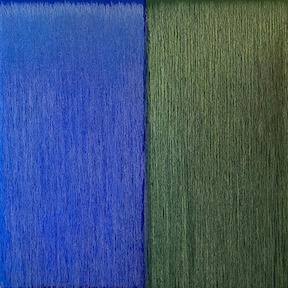 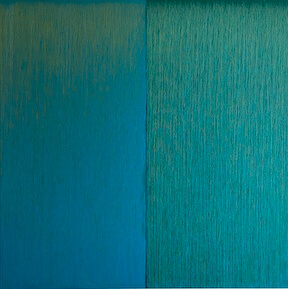 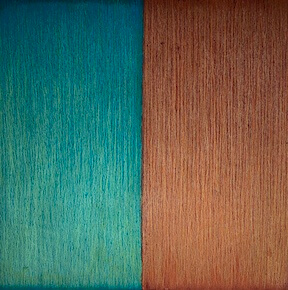 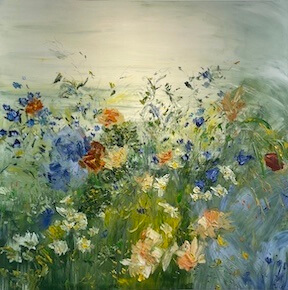 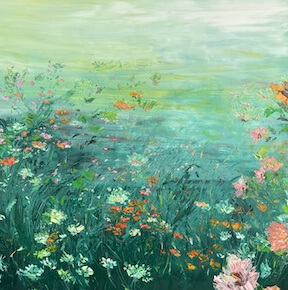 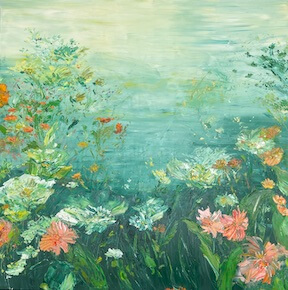 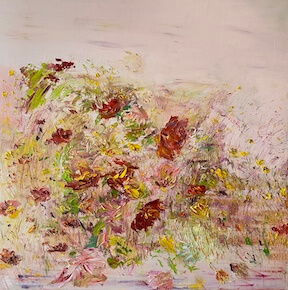 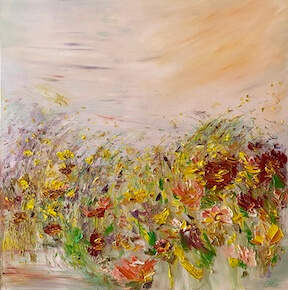 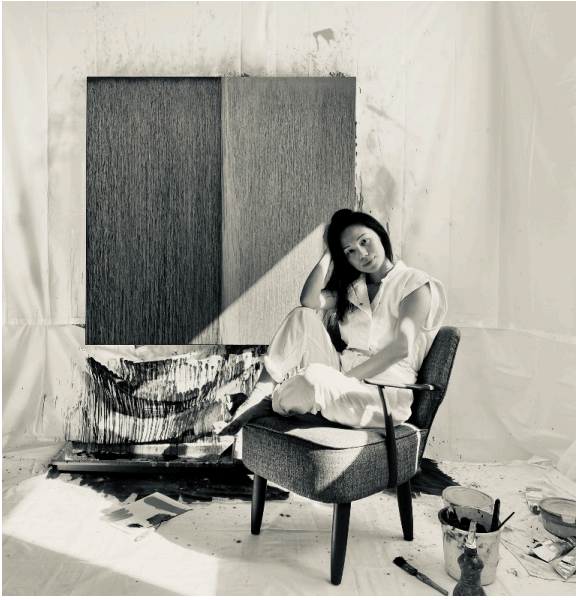